The Sun is continuing to show a number of active regions in visible white light with a number of sunspots visible at the time of writing (27th December). The usual solar observing precautions of course apply – use either the projection method or a suitable full aperture solar filter. If in any doubt, the safest way to avoid permanent eye damage is not to observe the Sun and instead seek out advice from one of our experienced members.

Mercury can be glimpsed low above the south-western horizon for around the first week of the month. Of course, a clear unobstructed horizon will be needed. On the 1st January, look around 4.30pm to the left of Venus for the magnitude zero Mercury. Binoculars will help the spot in the evening twilight, but wait until after the sun has set before looking for Mercury. On the 4th January, Mercury will form a celestial triangle with the young waxing crescent Moon to it’s left and Saturn above. Mercury reaches greatest eastern elongation on 7th January after which time it will rapidly descend into the twilight, passing through inferior conjunction on 23rd January.

Venus is at the end of it’s comparatively poor evening sky apparition. To catch our neighbouring world, you will need to look low above the south-western horizon straight after sunset in the first few days of the New Year. Venus’ magnitude -4.3 brilliance should still let it shine through the bright twilight. Look at around 4.15pm. After the first few days of January, Venus will disappear from view, passing through inferior conjunction on 9th January. By the 21st January, Venus will be visible as a morning object, low down above the south-eastern horizon from around 6.30am. The morning of 29th January will see Venus to the upper left of Mars, with the waning crescent Moon to the right of Mars (Stellarium chart below) 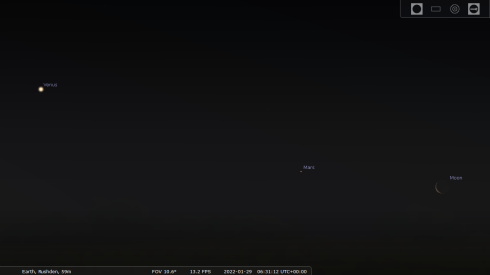 Mars enters 2022 as a tricky object to spot, low down above south-eastern pre-dawn horizon, rising at 6.15am at the start of January. At magnitude 1.5 and displaying a tiny disc, Mars is just beginning it’s build up to it’s opposition date in December!

Jupiter remains on view in the early south-western evening sky. At magnitude -2, the giant planet will still easily be located, but it is now moving toward the end of it’s current apparition. Best observations will be had whilst the planet is at it’s highest as evening twilight fades. At the start of January, Jupiter has set not long after 8.15pm, by the end of the month the planet has set by 7pm. On the evening of 5th January, the young waxing crescent Moon will be directly below Jupiter.

Saturn, like Jupiter, can still be glimpsed in the south-western early evening sky at the start of the month. However being further west along the ecliptic, Saturn is lower than it’s planetary cousin, setting by 6.30pm on 1st January. By mid-January, the ringed planet will be lost from view having descended into the gathering evening twilight.

Uranus remain on view in the evening sky among the stars of Aries. At magnitude 5.8, a pair of binoculars will be needed.

Neptune can still be glimpsed in the early south-western evening sky among the stars of Aquarius.  Look around 6pm at the start of the month. As with the brighter Jupiter and Saturn, Neptune is also nearing the end of it’s current apparition and will soon be lost from view.

Ceres remains on view as an evening sky object among the stars of Taurus. At magnitude 8, you will need a pair of binoculars or a small telescope to pick it up. It’s general position for mid-January, is shown in the above Uranus Stellarium chart.

Comet C/2021 A1 Leonard has now moved into the southern skies and is sadly no longer visible from the UK.

International Space Station Passes can be observed in the morning sky for the first week of January, before switching to evening passes from 18th January for the remainder of the month.

The Quadrantid Meteor Shower is active from the 28th December through to the 12th January, however the majority of activity will be in the night of 3rd/4th January when a Zenithal Hourly Rate of up to 110 meteors can be achieved. The radiant of the Quadrantids lies within the long defunct constellation of Quadrans Muralis, which now forms part of the constellation of Bootes. Moonlight will not interfere with observations on the night of maximum activity, with the radiant at a reasonable altitude in the north-east by late evening.